APR is pleased to present the ultimate engine control unit (ECU) upgrade for the 3.0 TFSI!

APR’s ECU Upgrades are the best value modification one can make to the 3.0T engine. The upgrades dramatically increase horsepower and torque, making for an exceptionally quicker and more exciting vehicle. This is made possible through APR’s optimization of the factory engine management system to take full advantage of the engine’s capabilities, without needing any end user adjustment. The software loads to the factory ECU through the OBD-II port, resulting in a clean and headache-free install.

APR’s ECU Upgrades are available in multiple stages, supporting various octanes both with or without any hardware modifications. Specific software is available for use with APR's Supercharger Drive and Crank Pulley upgrades, as well as APR's Ultracharger Throttle Body upgrade, while all stages are fully compatible with an upgraded Intake System, exhaust systems, APR Supercharger Cooling System or other minor bolt on modifications.

The APR Stage I ECU Upgrade is the first step towards making more power! This simple upgrade requires no engine hardware modifications, and produces 447-478 HP with 379-399 FT-LBS of torque. Gains as high as 110-137 HP and 89-110 FT-LBS of torque are available throughout the power band, making the vehicle exceptionally quicker in all scenarios. To get more power, the vehicle can be outfitted with an upgraded Intake System, exhaust systems, APR Supercharger Cooling System and other small modifications without requiring any new modification to the ECU.

For the next step in incresed power, APR Stage II ECU Upgrade is available for use with APR's Supercharger Drive and Crank Pulley upgrades. 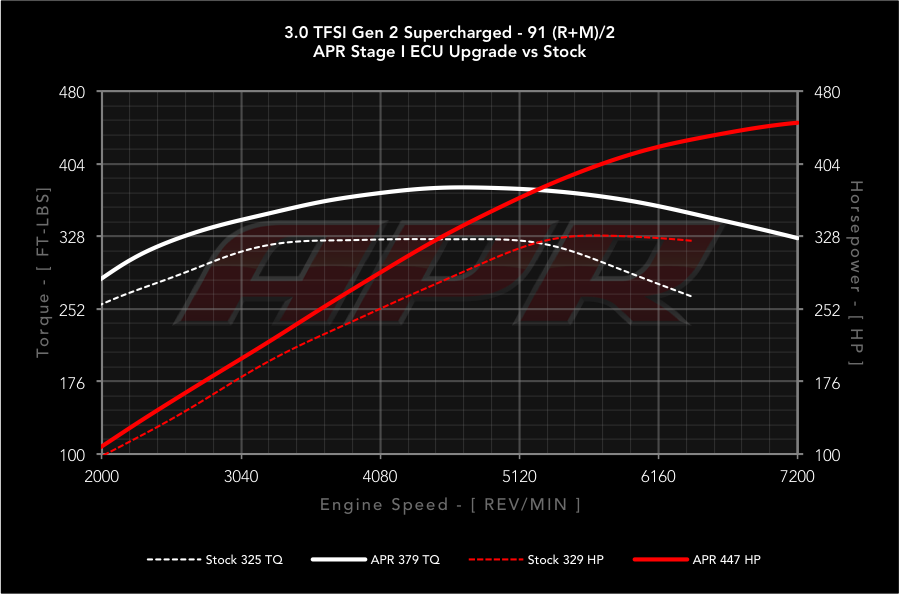 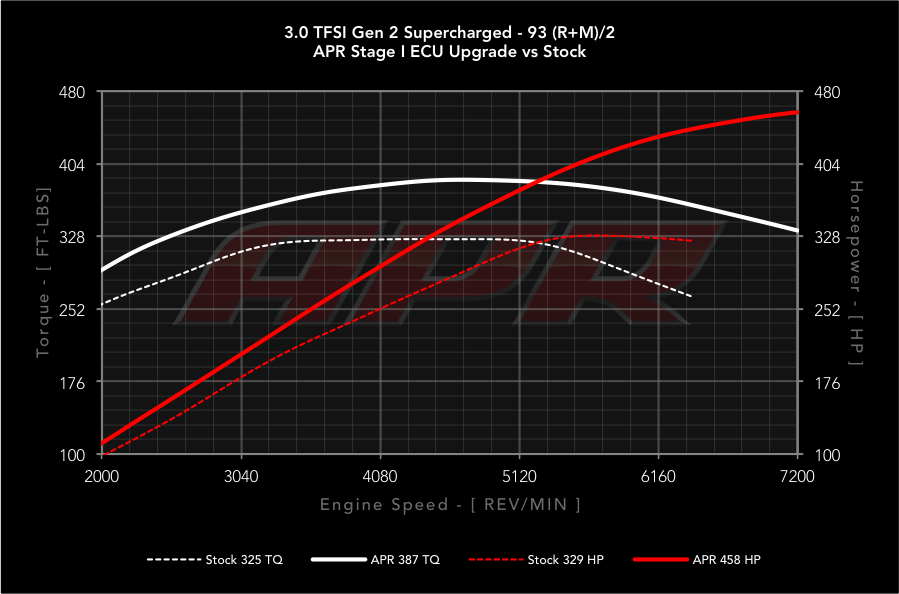 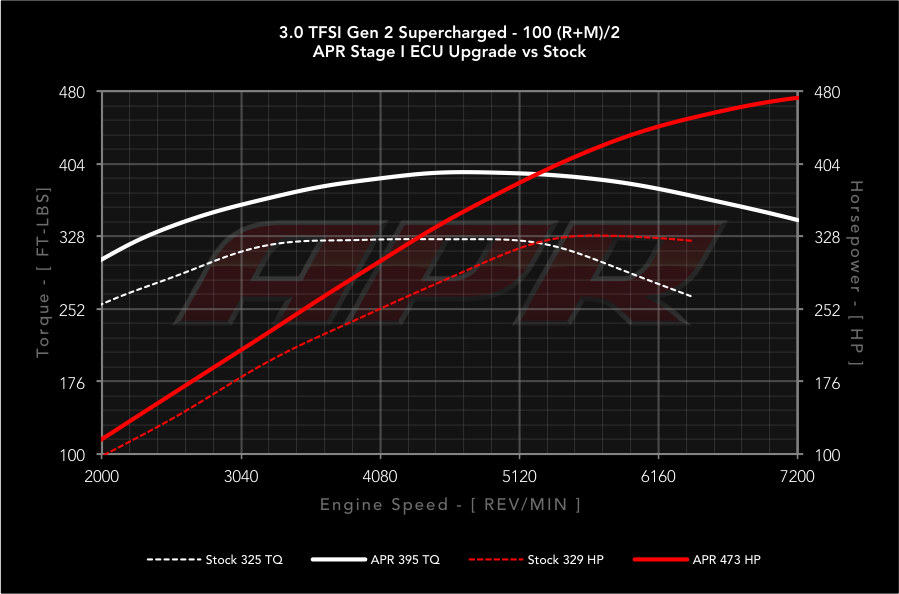 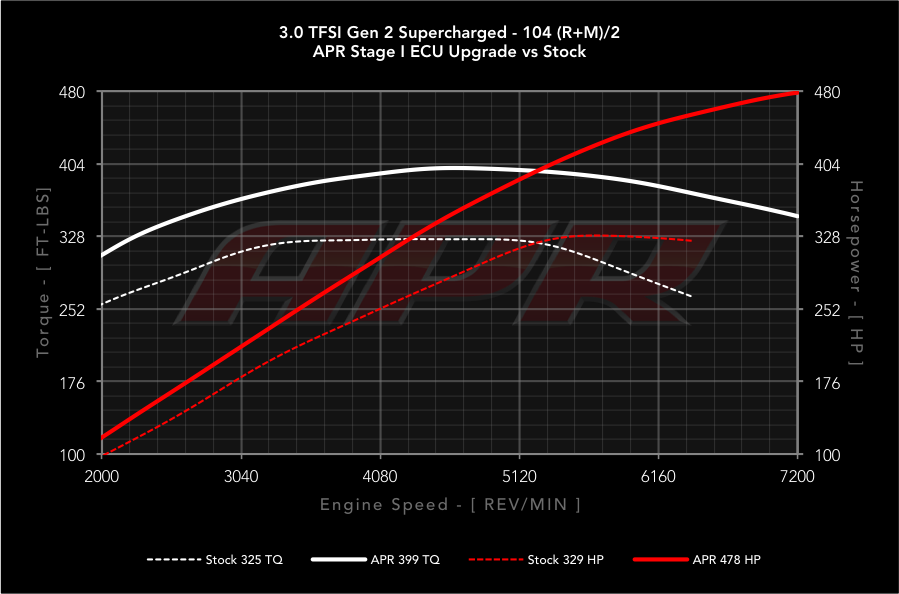 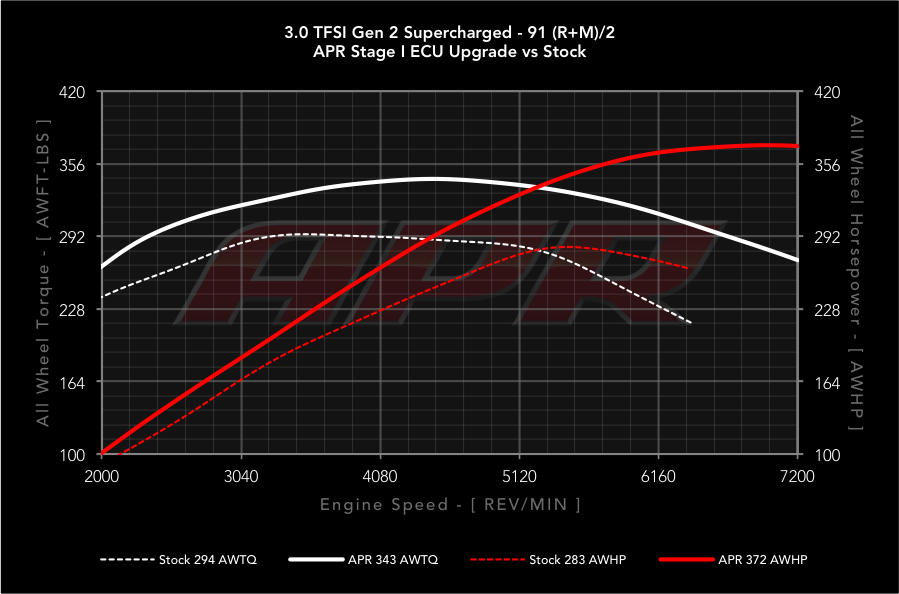 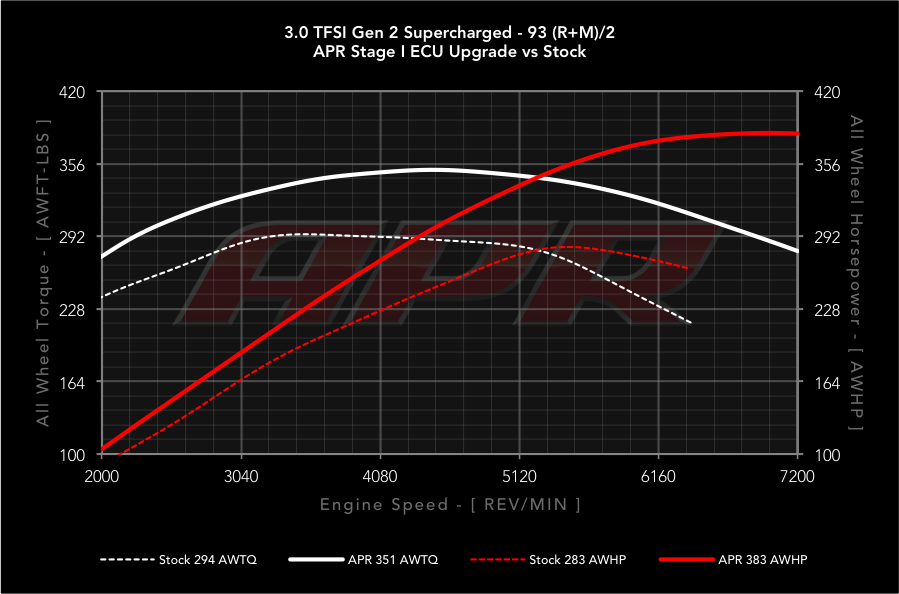 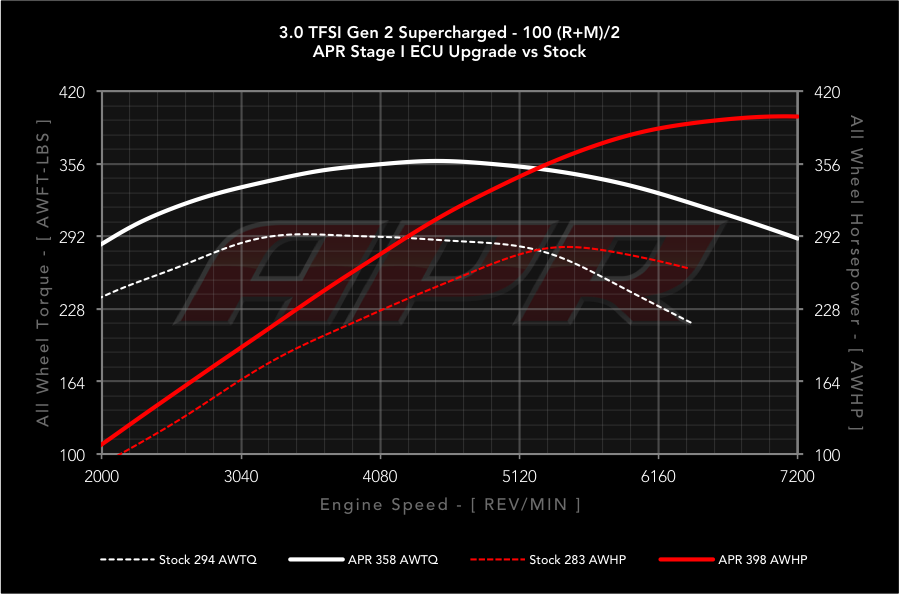 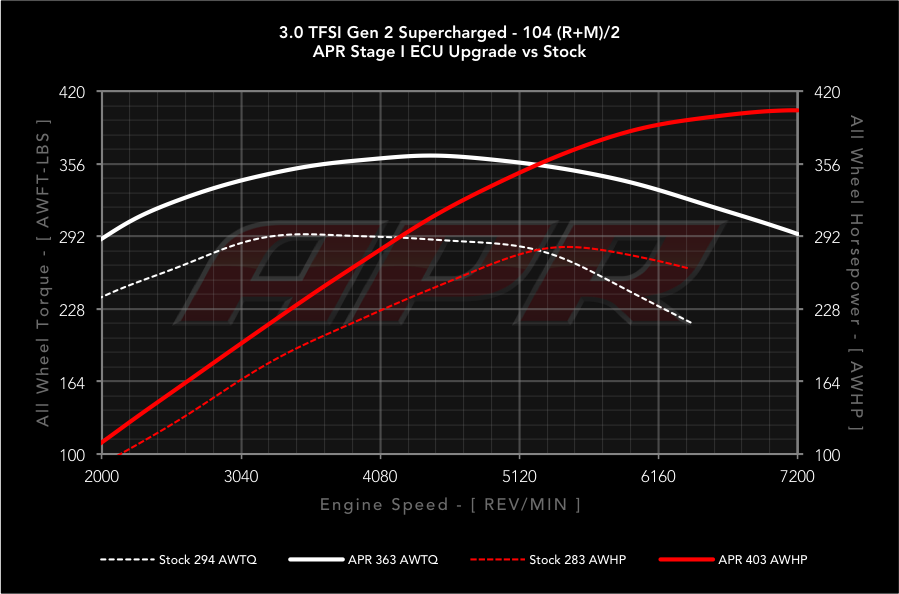 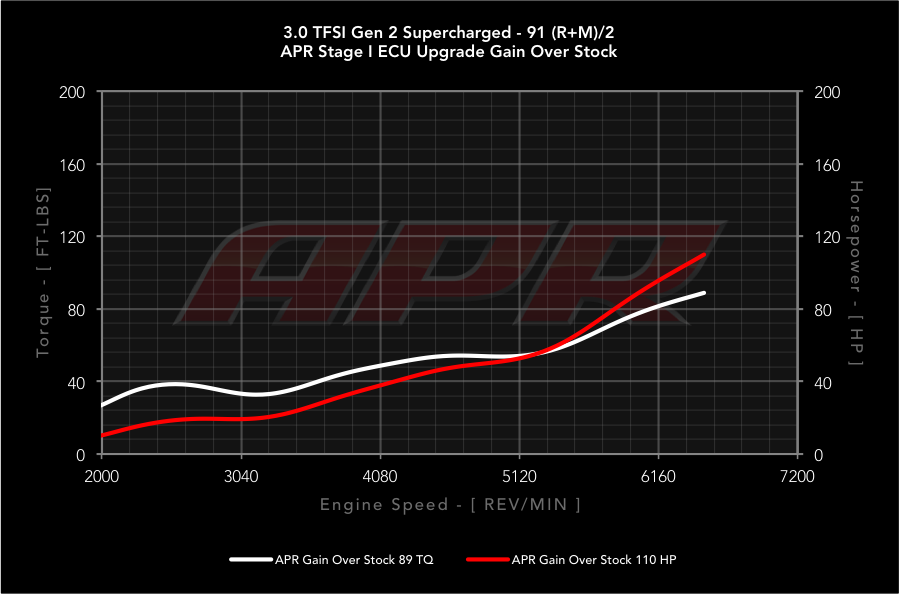 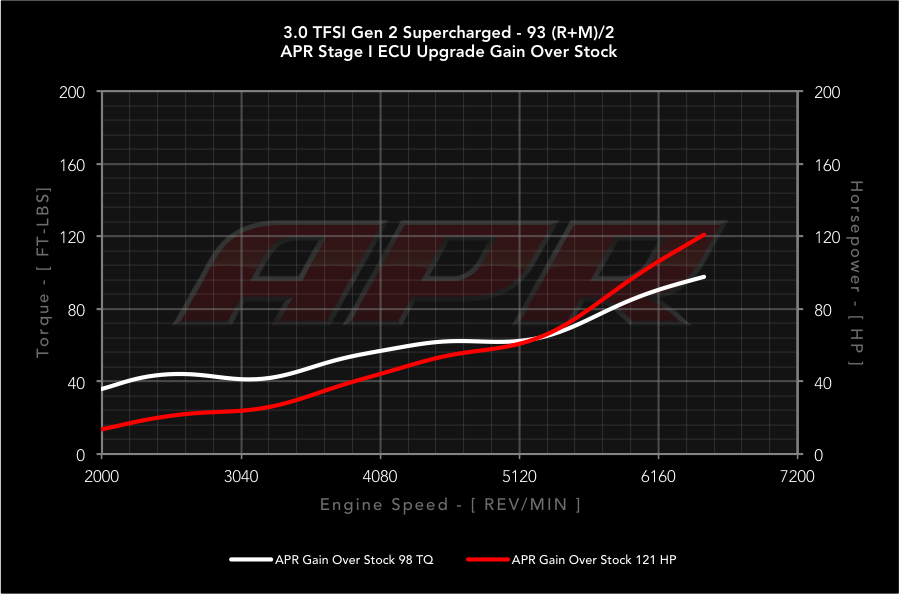 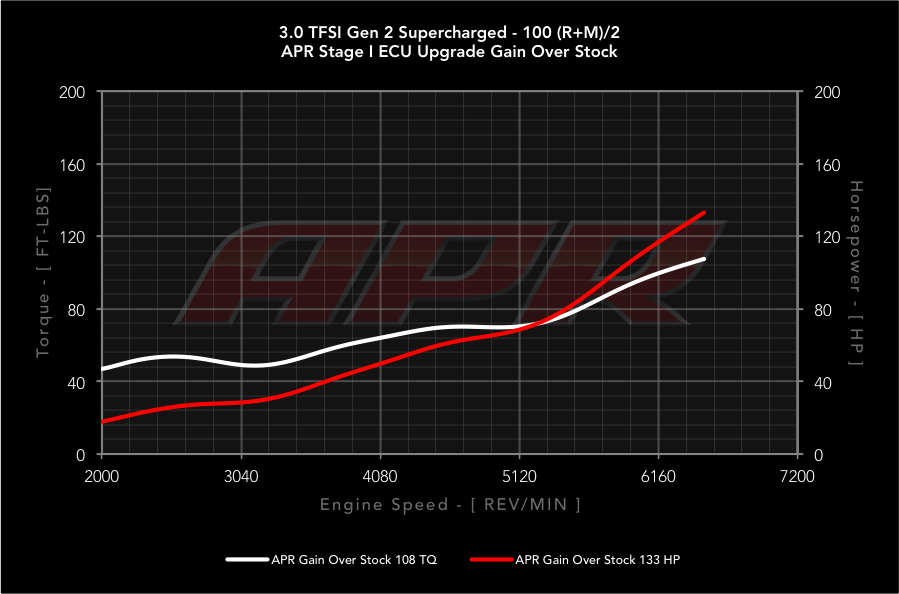 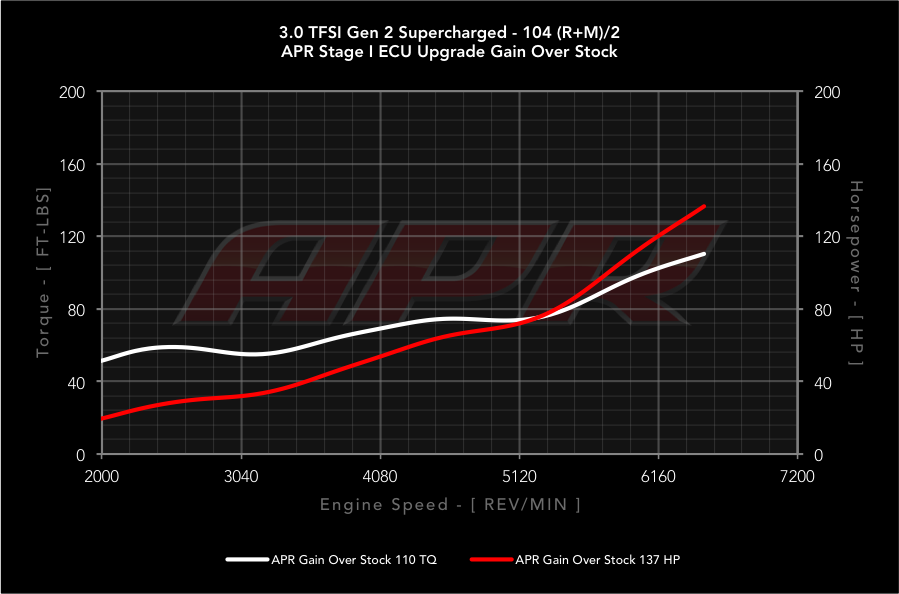 The 3.0T engine uses a Continental Simos 16 ECU for engine management. Basically, it’s a computer that tells the engine how to operate. Tuning software, like the APR ECU Upgrade, tells the engine how to make more power. It does this by running more boost pressure, optimizing the cam shaft positions, adjusting the air/fuel ratio, advancing ignition timing, and more.

The 3.0T’s ECU is incredible. Without the driver knowing otherwise, the ECU makes intelligent adjustments to the engine’s operations to keep it running smoothly. Unlike ECUs found in many other makes and models, when properly tuned, the ECU eliminates the need for custom tuning to maximize output, even when weather conditions change dramatically.

The ECU is powerful, but extremely difficult to master. Without mastery, the ECU must be simplified, removing what makes it so desirable. The result is an incomplete product that often requires end user adjustment to maximize output in limited scenarios. On the contrary, APR’s Engineers spent years mastering the ECU to unlock its full potential. With complete access to the thousands of maps, tables and variables within, as well as a high-level understanding of how it works, APR’s Engineers were able to take advantage of everything the ECU has to offer. Power is maximized in nearly all scenarios, eliminating the need for end user adjustments. High performance operational modes are enabled and calibrated to deliver smooth daily driving, with a snappy and responsive throttle during moments of spirited driving. Lastly advanced high-output protection routines are enabled, allowing the ECU to make constant adjustments to airflow and fuel to cool and protect the engine, all without the driver knowing otherwise.

APR’s Electrical Engineers have the ability to alter the code structure of the ECU. Through code levels changes, APR's Engineers are able to add features to the ECU. Other changes allow higher torque limits than those achievable through only modifying calibration data or using piggyback devices as is the case for many tuners.