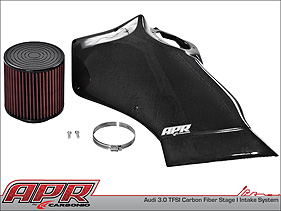 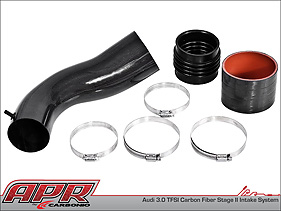 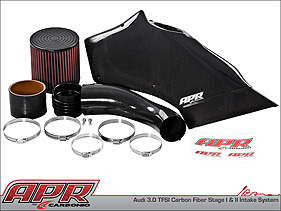 Carbonio's latest carbon fiber intake for the 3.0 TFSI engine is a ram air design that completely separates the intake filter from the engine bay. Building from years of experience on and off the race track, Carbonio's and APR's engineering teams have spent countless hours developing a true cold air and ram air carbon fiber design that can be recreated affordably for the street performance enthusiast.

For many years professional motorsport organizations have suffered great expense to properly tune the air intake delivery system for turbo and supercharged engines for use in endurance and sprint races where every last horsepower and pound feet of torque can make the difference in position when crossing the finish line. Historically these designs have proven to be the most efficient and powerful although the most expensive to produce.

Aftermarket performance companies have attempted to capitalize on these designs however the cost restraints have typically resulted in compromise and deviation from the true engineering principles associated with motorsport accomplishment. Don't be fooled by catch phrases and tag lines alluding to a new intake technology or special design characteristic. You won't see any of these gimmicks installed on race cars at the Nurburgring.

Carbonio and APR have gone even further to maintain all oem specifications necessary to integrate cohesively with an otherwise stock engine to avoid raising eyebrows at the dealership. Flexibility was another characteristic of Carbonio's and APR's design whereas the new TFSI intake is also suitable for Stage 1 and Stage 2 modified engines all the way up to future supercharger upgrades.

The OEM intake system includes resonators in the hose connecting the air box to the throttle body designed to reduce supercharger whine. The APR Carbonio intake system in Stage I form replaces the factory air box and filter, and will deliver roughly 11 AWHP over stock. The Stage II back pipe when combined with the Stage I Air box will increase power further to around 15 AWHP and will slightly increase intake supercharger whine. 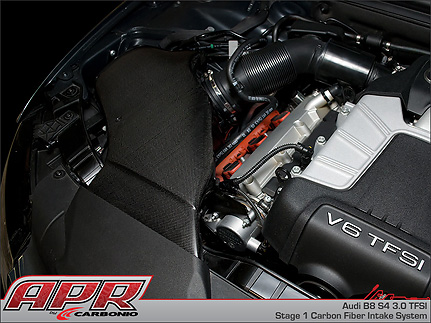 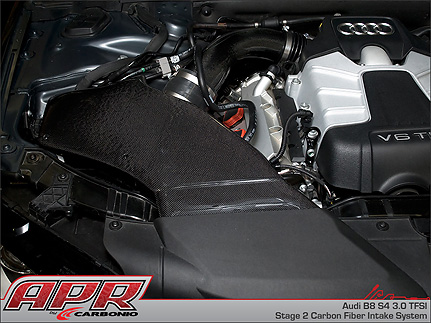 Benefits of the Carbonio CAI System include: 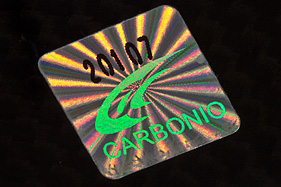 Each APR Carbonio intake system is branded with a unique, one time use hologram and serial number in an effort to provide better service for our customers. The hologram displays the Carbonio logo and the name "CARBONIO" when rotated in the light. If you feel you are a victim of counterfeit products, please don't hesitate to contact us directly.