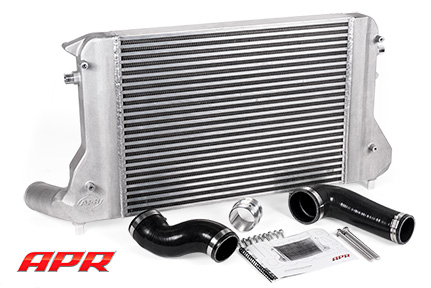 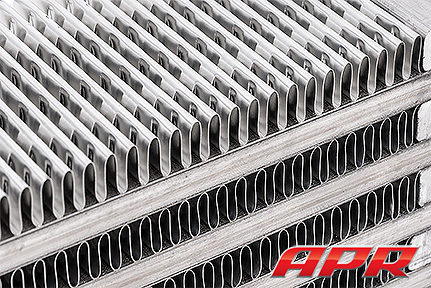 Each unit uses a high quality, bar and plate core with staggered and louvered fins. The Intercooler’s exceptionally tall design and fin structure exposes the core to a greater volume of airflow than possible with the factory or similar aftermarket short and thick core designs. With more of the intercooler directly exposed to the elements, cooling effectiveness dramatically increases. 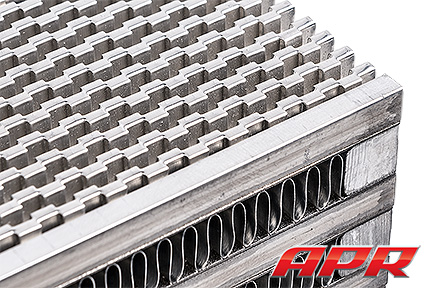 Internally, the APR Intercooler System features a staggered and louvered fin design with a core density chosen as a balance between cooling effectiveness and pressure drop. Due to the core’s massive volume, the balance was easily adjusted to favor minimal pressure drop while still providing superior effectiveness compared to the stock tube and fin design. 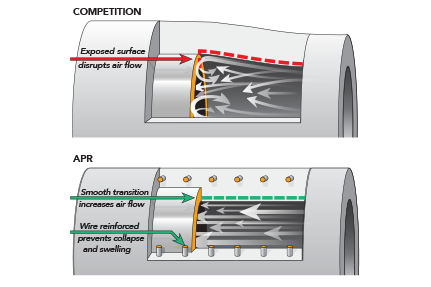 Multi-ply silicone hoses provide an unrestricted path for airflow entering and exiting the intercooler. The hoses are engineered to properly connect the intercooler to the factory charge piping system.

APR’s Easy-Flow Silicone Hose design features stepped mounting surfaces for smooth transitions from one pipe to another. Traditional designs simply sit on top of each other, often resulting in a disruptive airflow path. By using the stepped design, hoses fit properly without airflow restrictions, resulting in the most ideal path for moving air through the intercooler and into the engine. 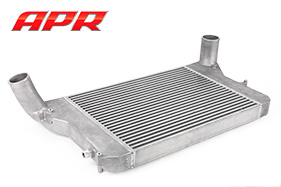 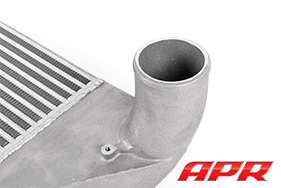 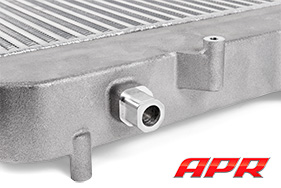 Several tests were done in order to prove the differences between the stock intercooler and the APR one. One test for thermal effectiveness involved placing the car on the dyno with our normal assortment and arrangement of cooling fans. The car was then run through a rigorous testing procedure that involved allowing it to idle to a normal operating temperature, and then running it through five power runs.

During each run, the engine speed was brought to 2000 rpm for fifteen seconds. This allows the air to run throughout the system and allows the intake air temperature to normalize and negate heat soak from the car sitting at idle. The car was then taken from 2000rpm to 6800rpm at full throttle under load over the next thirty seconds. The car was then allowed to idle for one minute before the next run was started. Each lighter line on the graph above represents each power run, and the darker line represents the average over five runs.

To see how the APR Intercooler compared to the competition, take a look at our competitive analysis!