APR is pleased to present a high pressure fuel pump upgrade for the 2.5 TFSI. 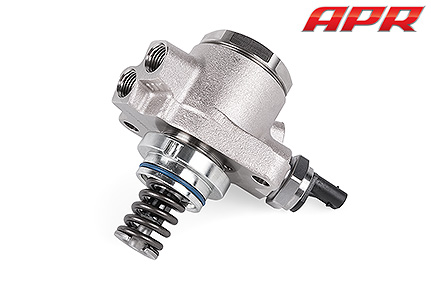 APR is an OEM supplier of high pressure fueling components to VAG and has operated with a nearly perfect track record since the program's motorsport backed inception in 2006. With thousands of pumps sold yearly, APR has a wealth of knowledge and manufacturing techniques utilized in the production of critical fueling components with exceptional reliability.

In the early 2000’s, VAG began supplying engines with a new direct injection technology known as FSI. Unlike conventional engines of the past, fuel is sprayed directly into the cylinders under extreme pressure resulting in increased power with lower consumption rates and fewer emissions. The technology has spread across VAG’s entire lineup of modern gasoline engines and is present in the 2.5 TFSI.

The engine’s fueling system operates to a maximum of 2,100 psi (145 bar) of pressure to correctly spray and atomize fuel directly into the engine’s cylinders. This is contrast to multi port injection vehicles of the past which typically operated around 40-60 PSI and were driven off of a low pressure fuel pump. To generate these enormous pressures, the 2.5 TFSI’s variable low pressure fuel pump supplies fuel to a cam driven and solenoid fired high pressure fuel pump which in turn supplies the injectors with fuel.

A three-lobe cam located on the exhaust camshaft drives the 2.5 TFSI’s Hitachi Generation III high pressure fuel pump. As engine speed increases, so does the pump’s ability to displace a greater volume of fuel per minute. The maximum volume the pump can deliver per revolution on the three-lobe cam is dictated by the stroke length from the cam lobe’s lift and bore diameter of the pump’s internal pressurizing cylinder. It’s important to understand, despite the name, APR’s High Pressure Fuel Pump upgrade is not necessarily designed to increase the engine’s fuel rail pressure. The primary goal is to increase the volume of available fuel.

The APR High Pressure Fuel Pump addresses fueling needs and leaves plenty of headroom for safety and further increased power levels in the future. By increasing the pump’s internal capacity, the fueling system is capable of displacing a higher volume of fuel per minute at every RPM. 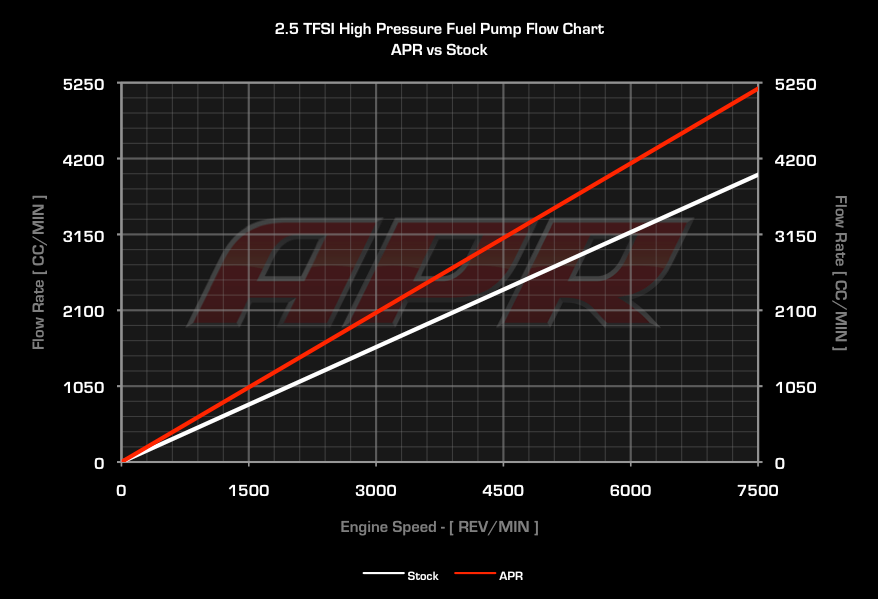 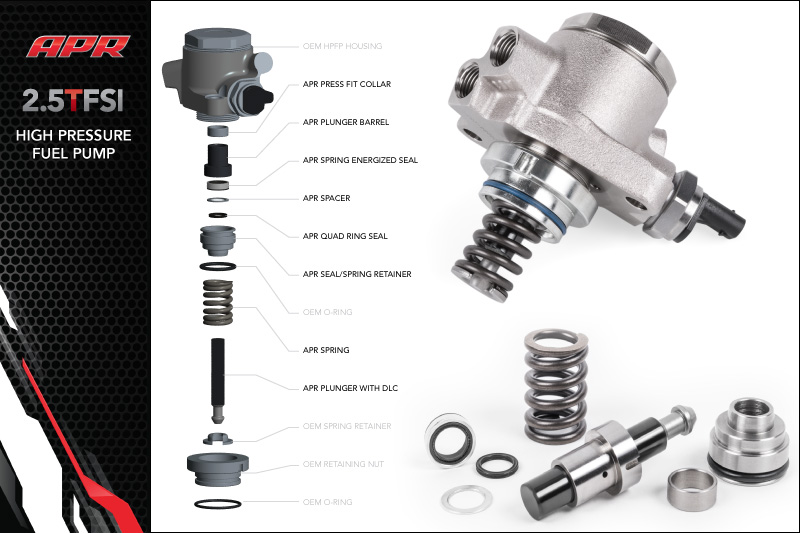 The key to APR’s reliability comes in part by use of extremely high grade materials and manufacturing techniques. The most critical components within the HPFP are the enlarged plunger and barrel. Each matched set is created using medical grade precision machining techniques deeply quality controlled all within the USA with dimensional tolerances as tight as .0001” and geometric tolerances as tight as .00009”. The plunger and barrel are created from certified and heat-treated bearing-grade stainless steel and undergo a special diamond like coating process for exceptional surfaces hardness and ultra reliable operation. The seals used in the pump are made of a high-performance filled polymer with a high modulus spring to retain the seal forces throughout the life of the product. The cross section of the seal is also of a proprietary design to maintain integrity over many years of use. Finally, to prevent float associated with altering the plungers mass, APR supplies each unit with a properly spec’d spring.

Ultimate reliability of this critical component is not easily created using inferior materials and manufacturing techniques. Across all direct injection markets, the community has come to see time after time, cheaper alternatives were met with sometimes irreversible engine damage. Leaking seals result in gasoline entering the engine’s oiling system and seized pistons due to weak tolerances and wear can result in increased wear or destruction of the engine’s camshaft and connected components.

All APR HPFPs are assembled in house under strict assembly guidelines to ensure ultimate reliability and accountability. After construction the APR fuel pump tester plays a critical role in the APR’s track record of success. The test stand allows each pump to undergo a critical initial break-in period after creation without risking first operation on a live engine. The stand simulates real world operating conditions while APR’s production teams inspect the pump for leaks. Solenoid operation is verified while ensuring the pump is operating within its design specifications. Each pump is then serialized and shipped in a highly protective box to ensure safety during shipping.

APR offers the 2.5 TFSI High Pressure Fuel Pump in two forms. A brand new pump may be purchased or the engine’s existing pump may be rebuilt at APR. A rebuilt pump undergoes the same treatment as if it were new. The pump is fragile so ensure it's packaged properly. Turnaround time is quick and can easily be checked and verified by calling APR.