APR’s ECU Upgrades are the best pound-per-horsepower modification one can make to the 2.5T engine. The upgrades dramatically increase horsepower and torque, making for an exceptionally quicker and more exciting vehicle. This is made possible through APR’s optimization of the factory engine management system to take full advantage of the engine’s capabilities, without needing any end user adjustment. The software loads to the factory ECU through the OBD-II port, resulting in a clean and headache-free install. Optional features, such as APR's EMCS Program Switching and APR Mobile are available. Furthermore, for those looking for tuning with a limited powertrain warranty, APR Plus has you covered!

APR’s ECU Upgrades are available in multiple stages, supporting various octanes both with or without any hardware modifications. Specific software is available for use with a high flow downpipe exhaust system and drop-in turbocharger upgrades are coming soon. Each stage is fully compatible with an upgraded intake, intercooler, catback exhaust, or other minor bolt on modifications.

Each stage includes optimizations to the factory boost gauge making it react more quickly and corrections to the power and torque gauges to match the increased output. Furthermore, we’ve added left foot braking, removed the speed limiter, raised the rev-limiter and added a motorsport limiter, adjusted the factory exhaust crackle to protect the catalyst, optimized cold start, retuned the exhaust flap actuation for the best performance and sound in multiple modes, optimized high altitude mappings, retuned the throttle for better response, and completely optimized the driving experience for street and track use making for a much more enjoyable driving experience!

The APR Stage 1 ECU Upgrade is the first step towards making more power! This simple upgrade requires no engine hardware modifications, and produces 459-542 HP with 451-506 FT-LBS of torque, depending on octane. Gains as high as 66-132 HP and 88-146 FT-LBS of torque are available throughout the power band. To get more power, the vehicle can be outfitted with an upgraded intake, intercooler, catback exhaust and other small modifications without requiring any new modification to the ECU. Upgrading the small factory intercooler is highly recommended on this platform.

Please note, our E85 software is not a full flex fuel program. In this mode the engine is only designed to work on E85, as found directly at the pump, including both summer and winter blends from E60-E85. Using traditional pump fuels in this mode may result in engine damage. Do not manually blend with traditional pump fuel or race fuels. To ensure proper E85 content levels, APR recommends using an E85 content sensor. For maximum safety, especially on vehicles that see road course use, or long autobahn top speed runs, APR recommends NGK heat range 9 (NGK-R7437-9) spark plugs gapped to 0.024" ±0.002" or 0.6mm ±0.05mm with a change interval of 10-15,000 mi or 16-24,000 km.

The APR Stage 1+ ECU Upgrade is the next step towards making more power! This upgrade is designed for use with the APR Inlet System and APR RS3 Intercooler System or APR TT RS Intercooler System and produces 493-569 HP with 454-520 FT-LBS of torque, depending on octane. Gains as high as 86-162 HP and 96-152 FT-LBS of torque are available throughout the power band. To get more power, the vehicle can be outfitted with an upgraded intake, catback exhaust and other small modifications without requiring any new modification to the ECU.

APR "Lo Grip" Stage 1+ modes are equipped with a features that help to reduce wheel spin and aid in 60 FT and 0-60 times on street tires and unprepped surfaces. However, for vehicles equipped with much better tires and surface prep, an optional “High-Grip” mode is available to maximize launching performance!

The TTE700 requires the included wastegate actuator. The GTX3582 requires the included turbosmart wastegate actuator and MAC 3-port solenoid. A proper 500 LPH+ @ 6 bar LPPF is required to run E85, but the stock LPFP is ok for all other fuels. The TTE700 produces 576-713 HP with 523-536 FT-LBS of torque. the GTX3582 produces 581-740 HP with 511-555 FT-LBS of torque. RHD vehicles without the turbo inlet will experience reduced output. In all cases, torque is kept flat to aid in component longevity.

This stage has optional high and low grip modes designed to reduce wheel spin and aid in 60 FT and 0-60 times depending on surface prep. Additionally this stage is available with optional exhaust crackle modes. The more aggressive modes increase the length, duration, intensity, and operating modes of the exhaust crackle. Aggressive modes are only recommended with testpipes. APR recommends NGK heat range 9 (NGK-R7437-9) spark plugs gapped to 0.024" ±0.002" or 0.6mm ±0.05mm with a change interval of 10-15,000 mi or 16-24,000 km. 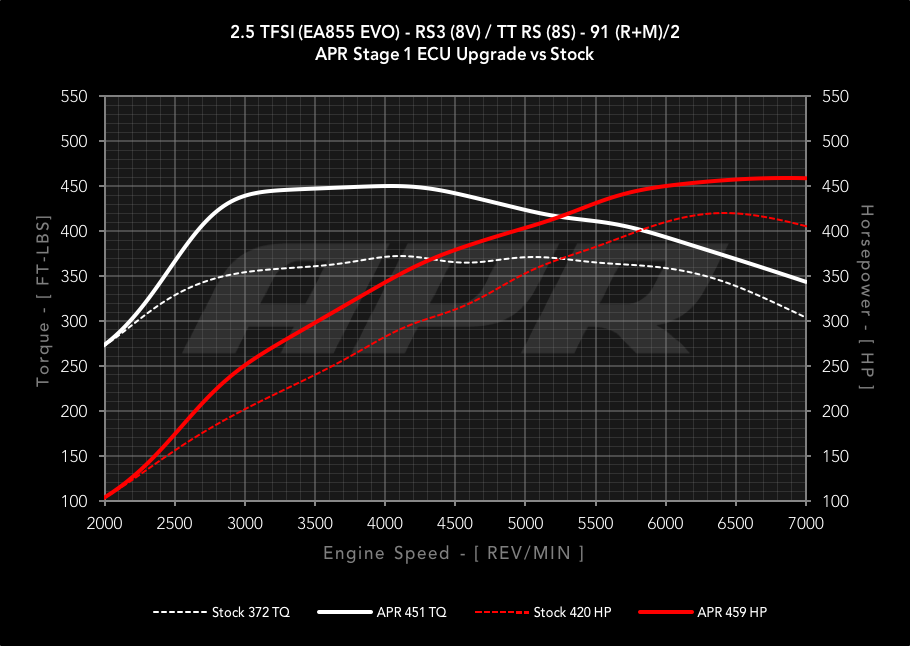 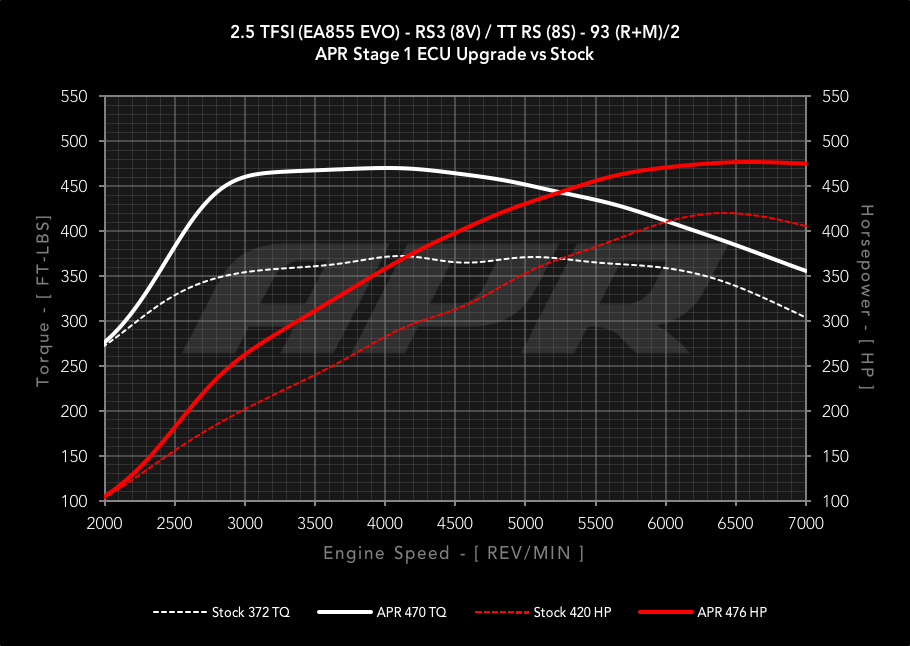 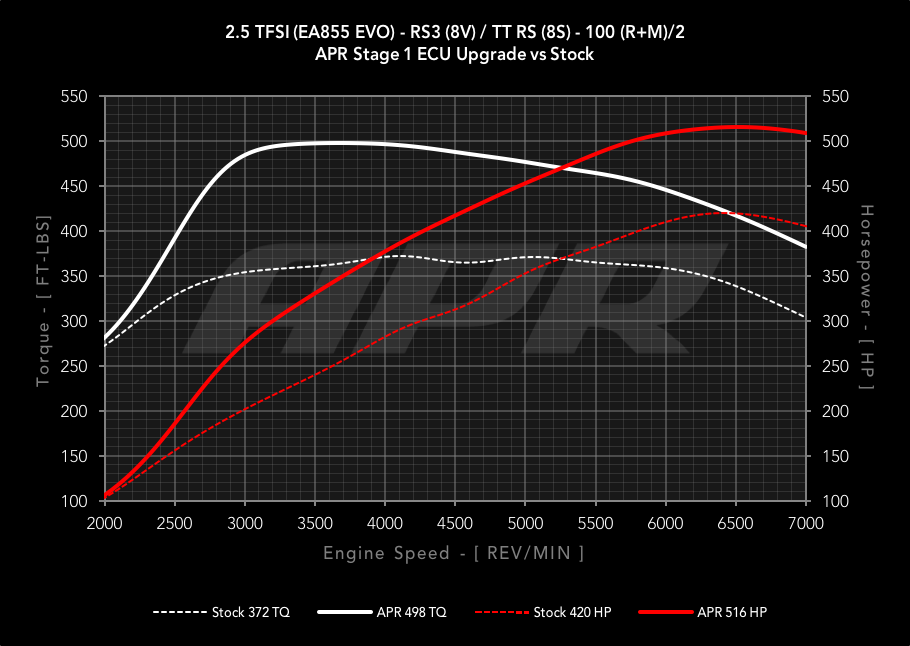 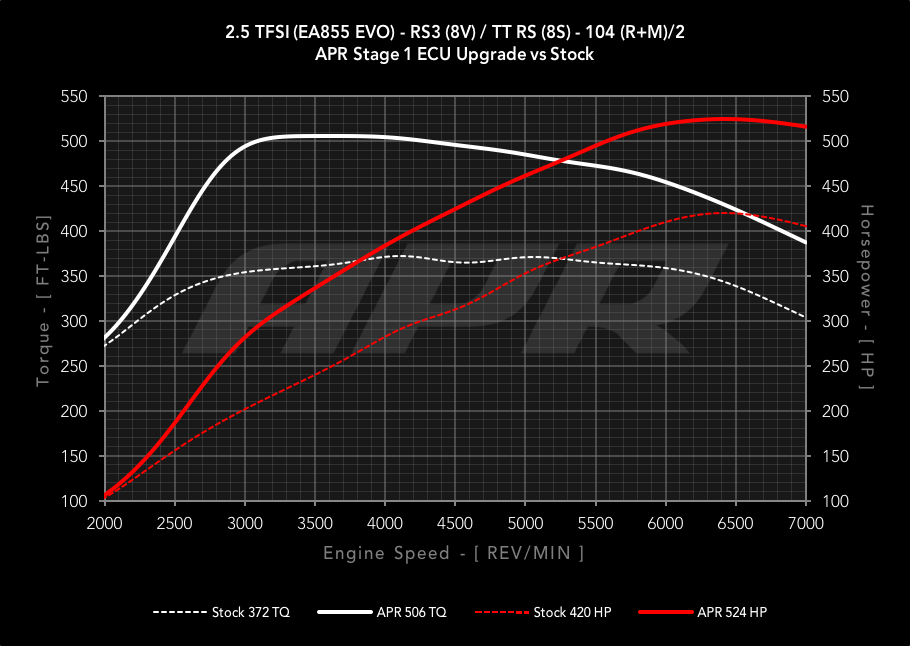 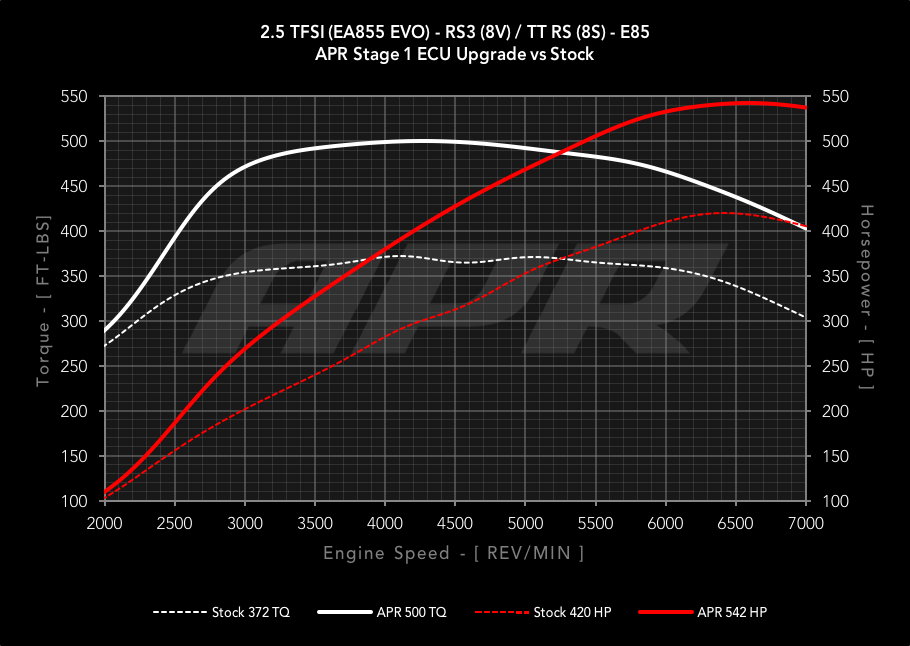 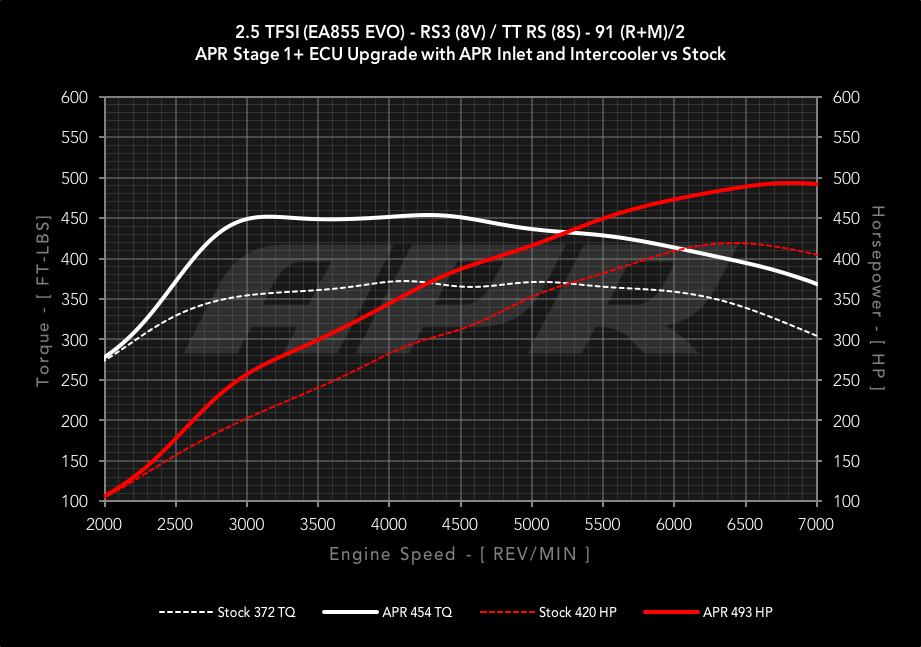 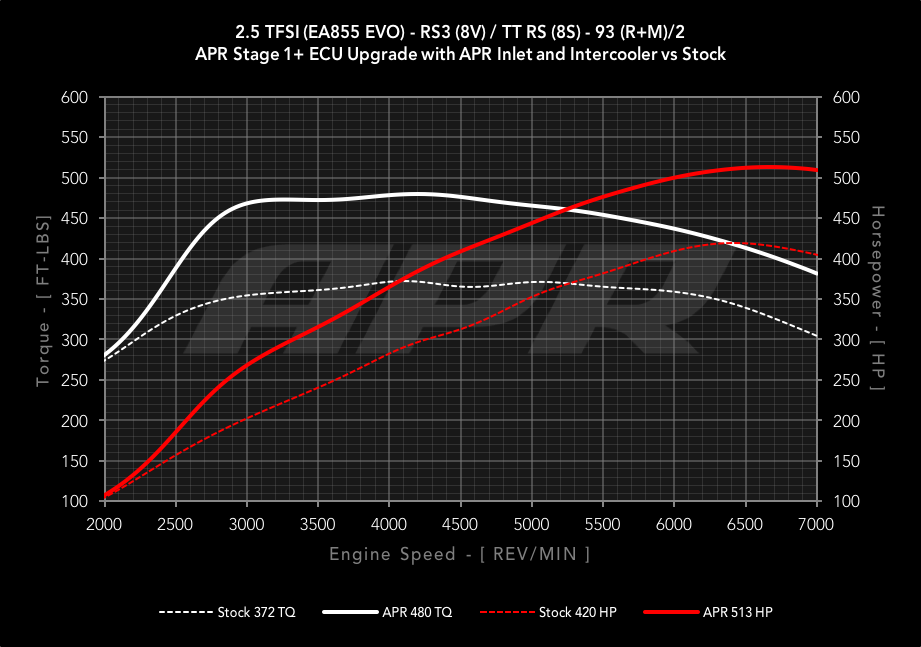 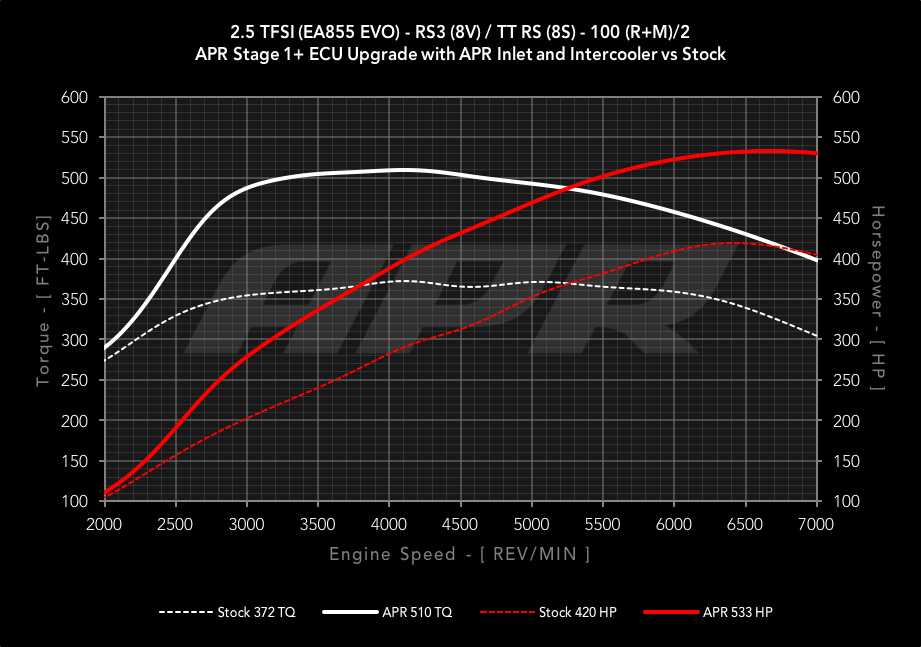 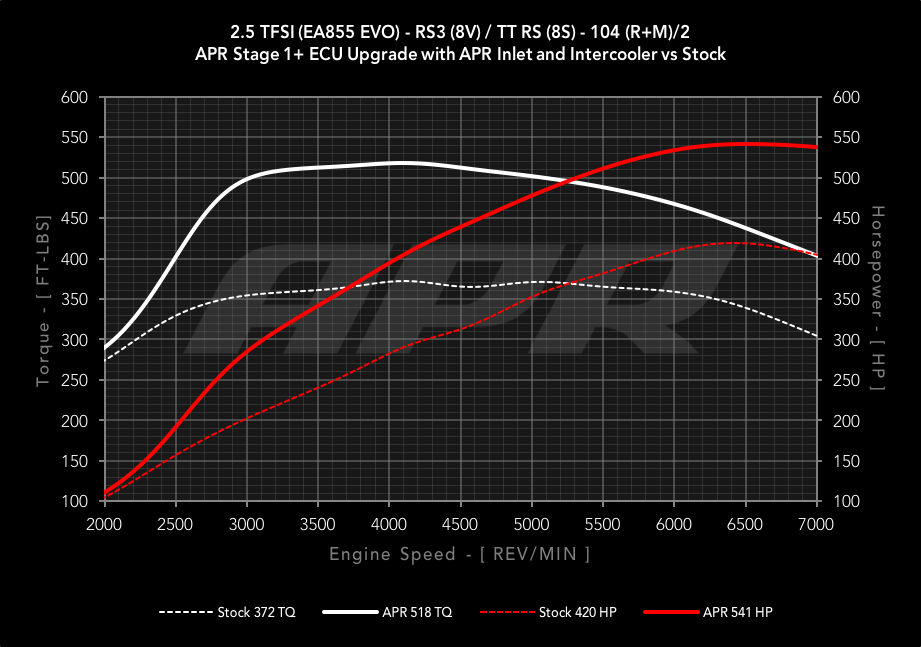 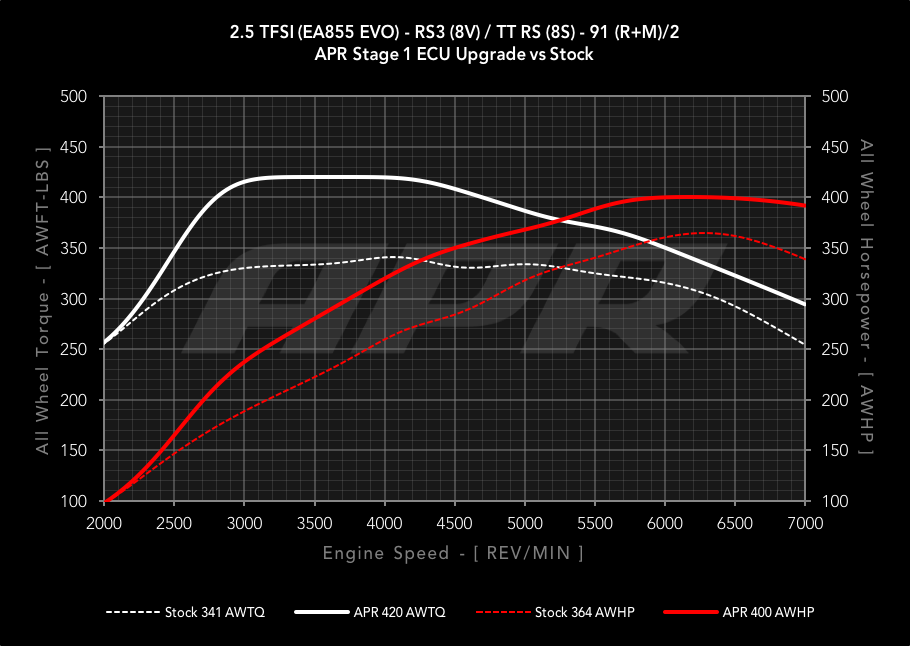 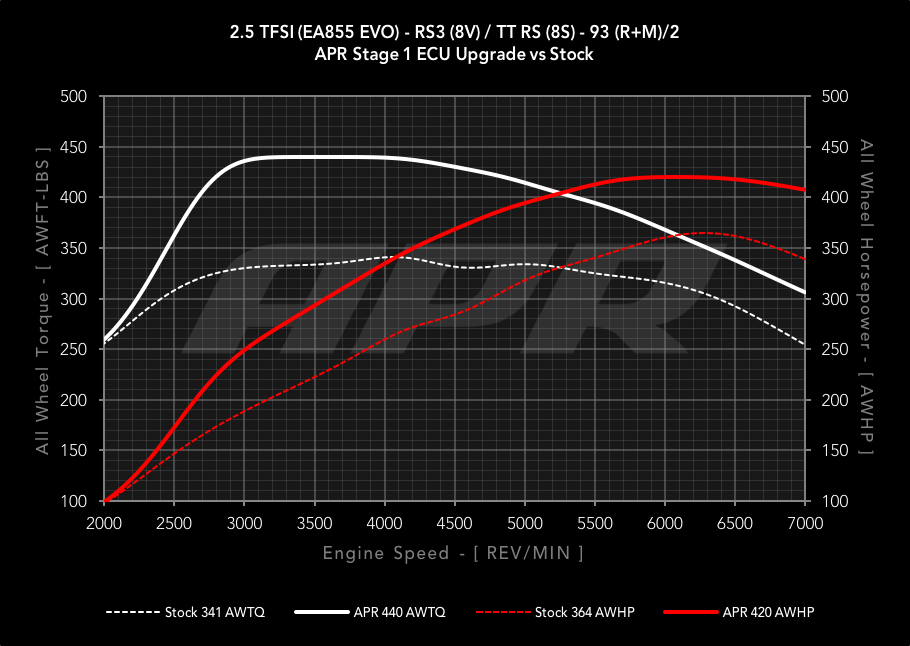 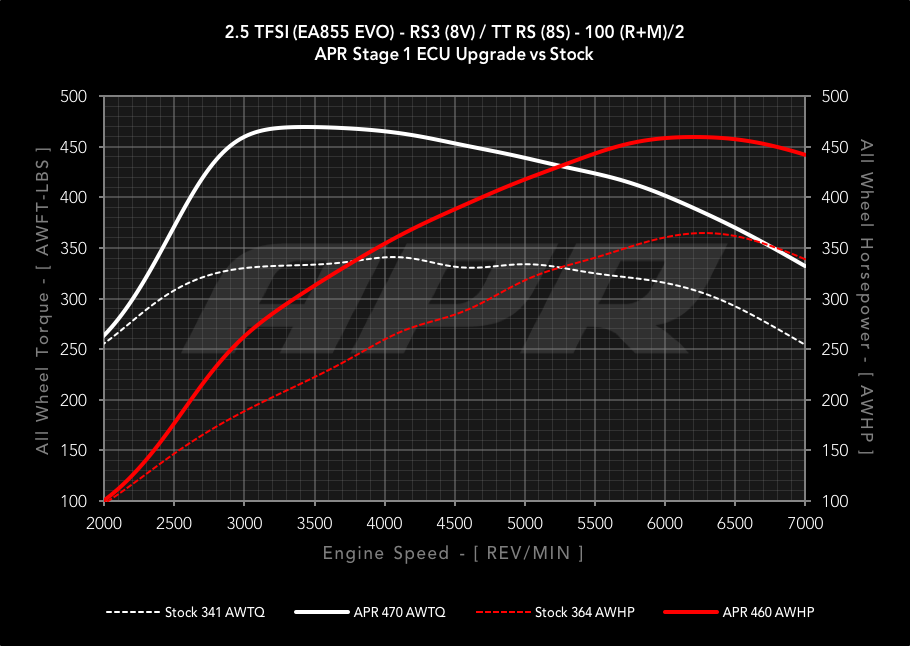 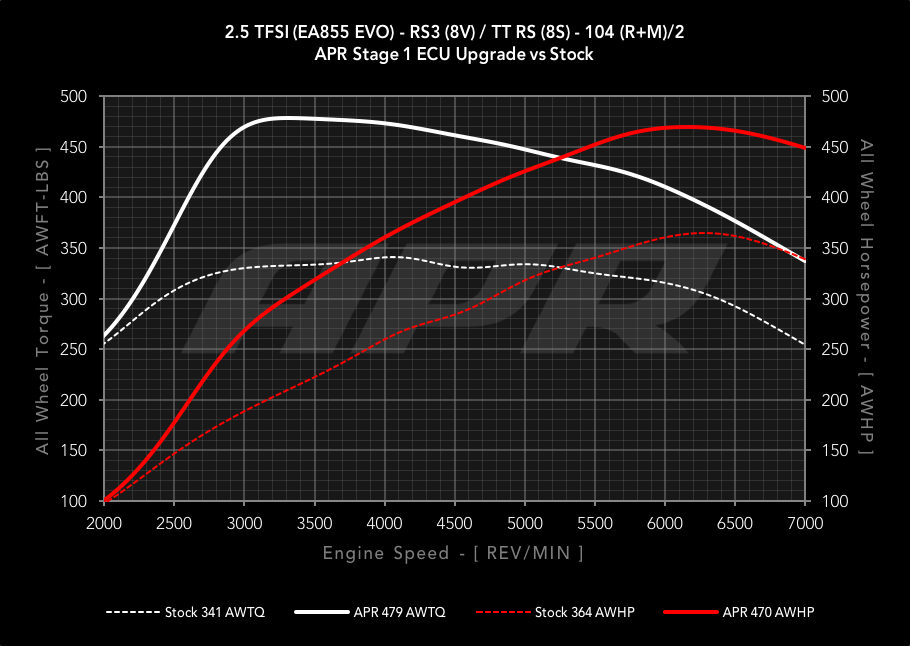 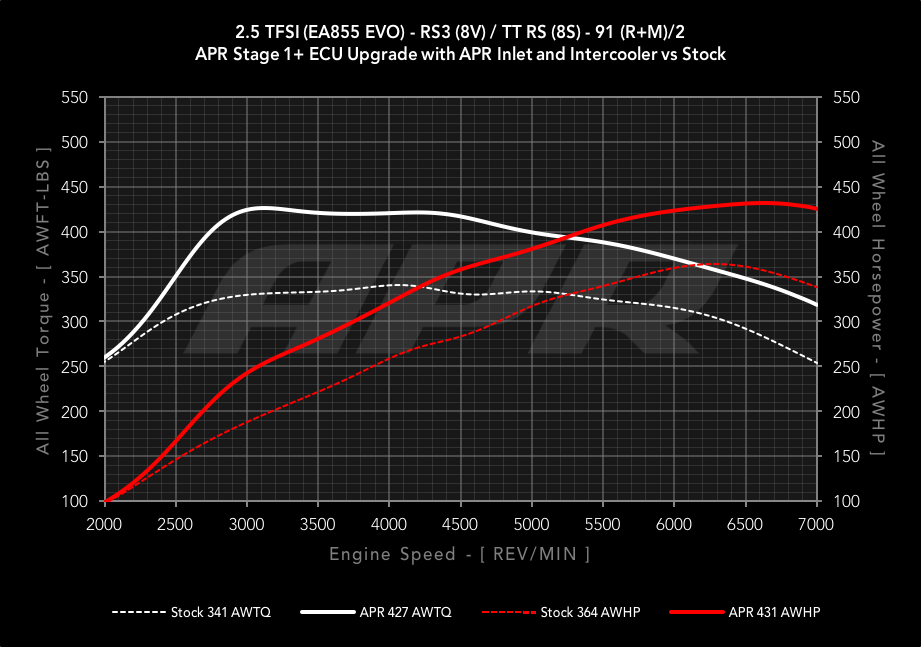 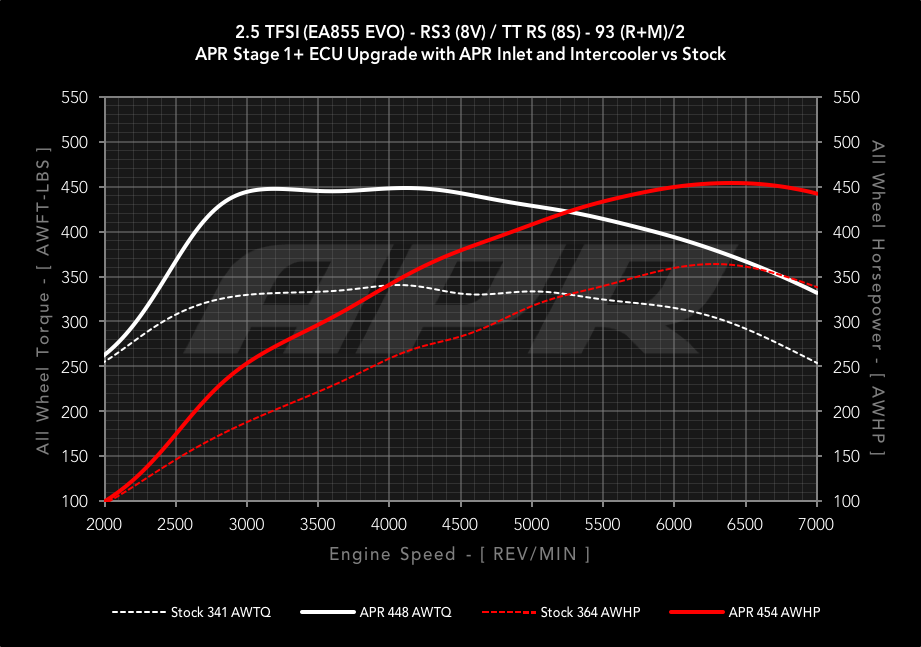 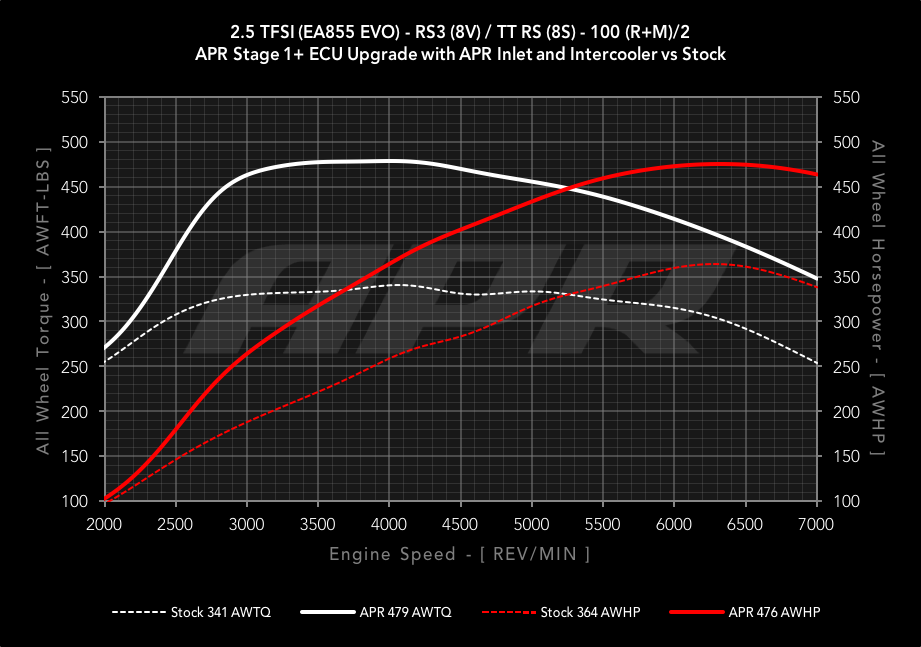 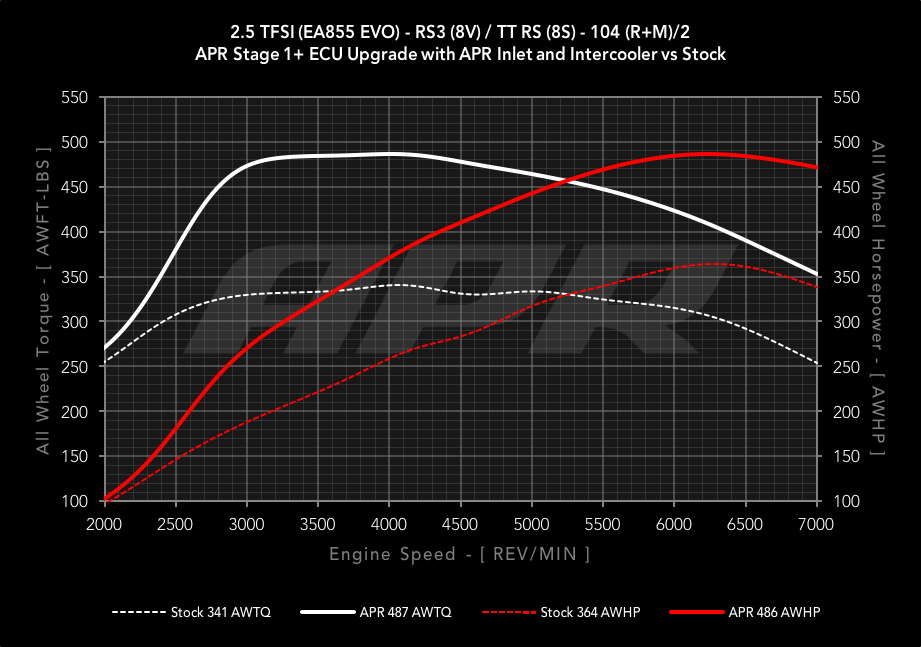 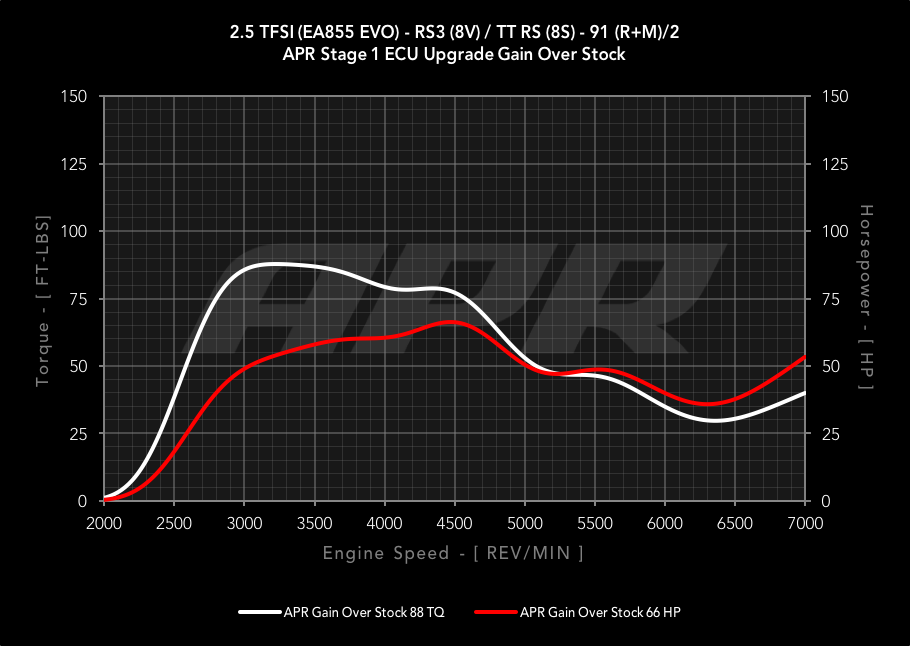 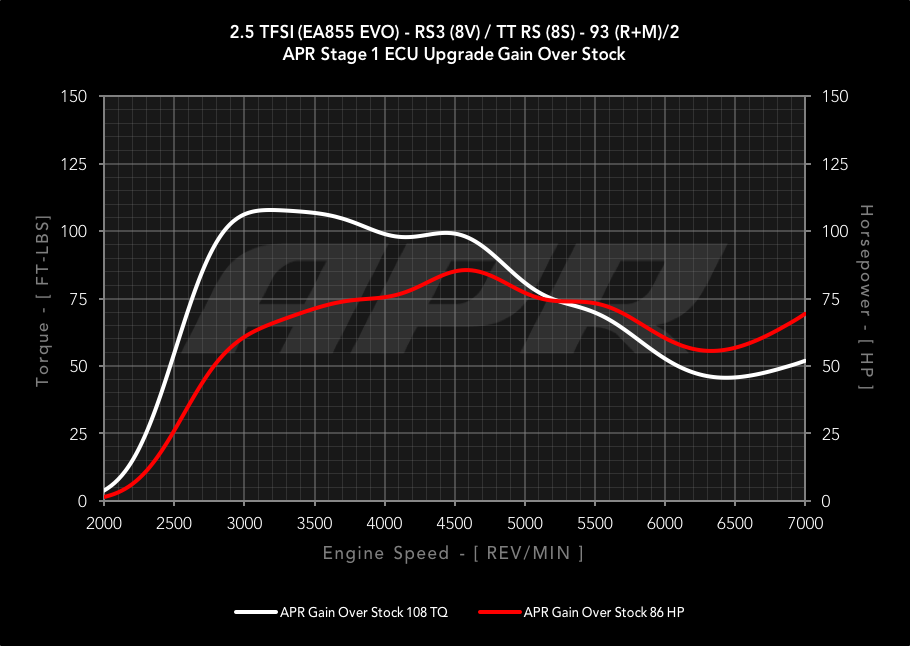 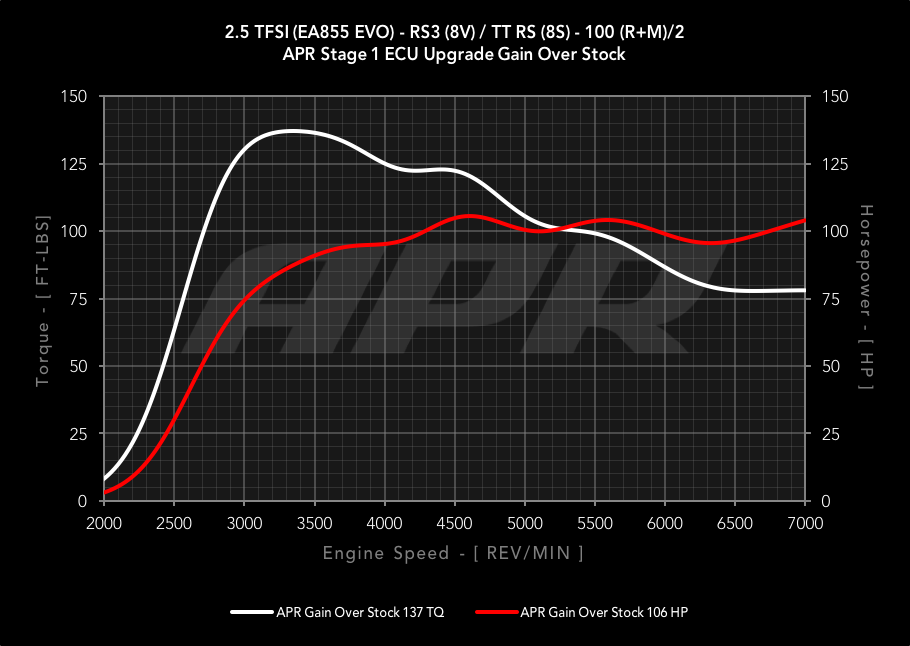 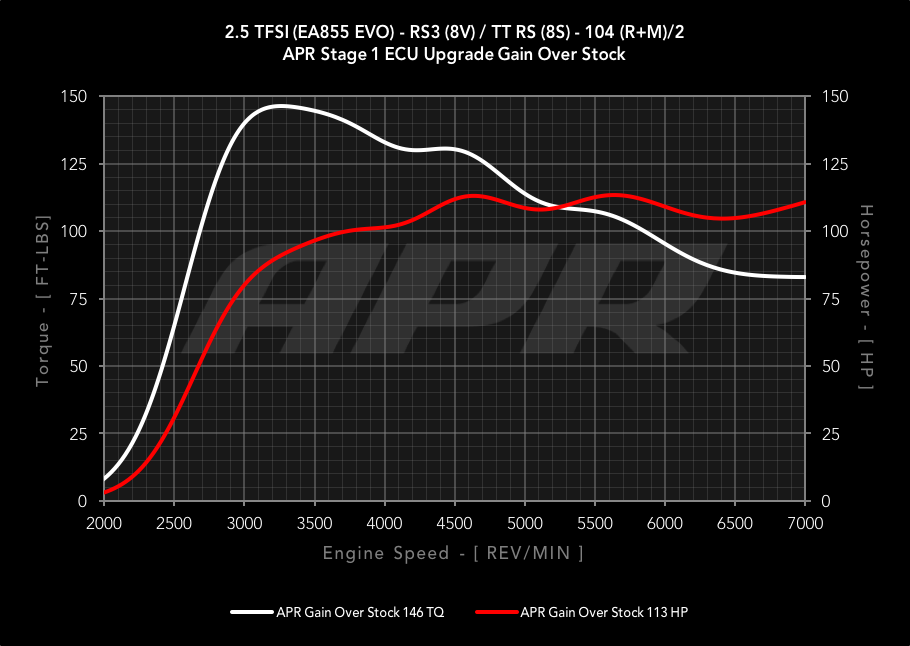 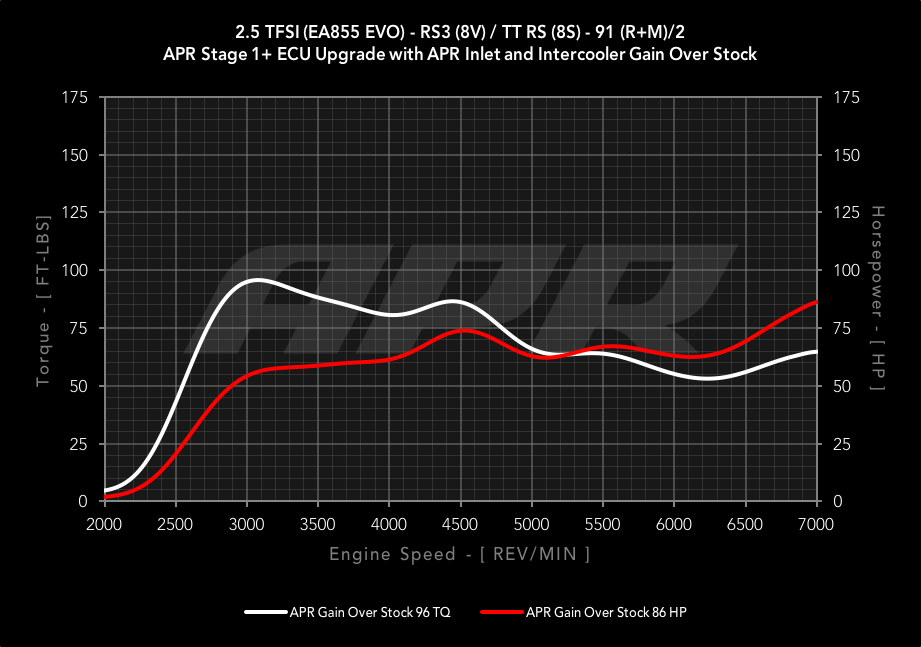 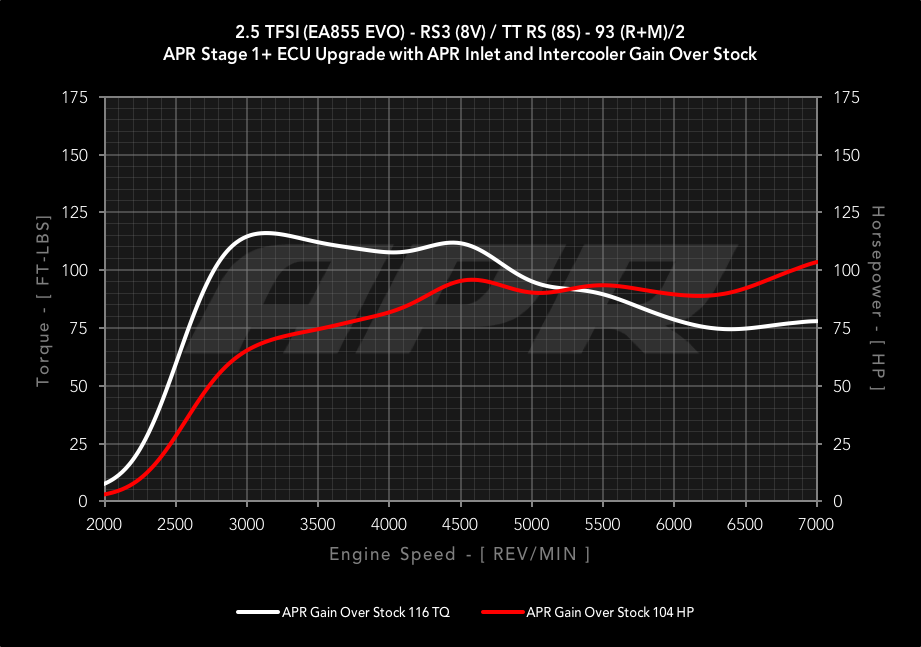 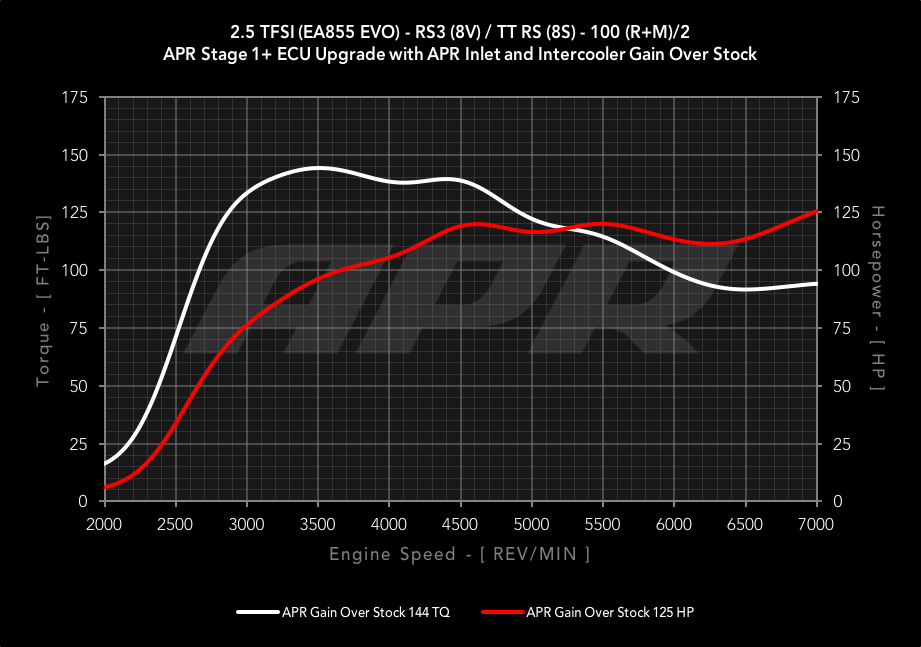 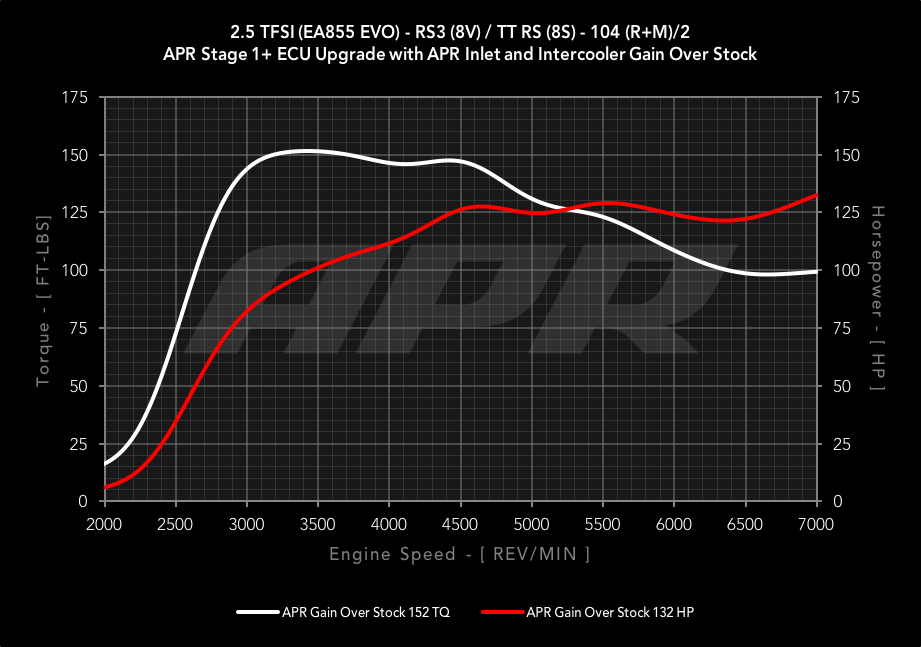 The 2.5T engine uses a Bosch MED 17 ECU for engine management. Basically, it’s a computer that tells the engine how to operate. Tuning software, like the APR ECU Upgrade, tells the engine how to make more power. It does this by running more boost pressure, optimizing the cam shaft positions, adjusting the air/fuel ratio, advancing ignition timing, and more.

The 2.5T’s ECU is incredible. Without the driver knowing otherwise, the ECU makes intelligent adjustments to the engine’s operations to keep it running smoothly. Unlike ECUs found in many other makes and models, when properly tuned, the ECU eliminates the need for custom tuning to maximize output, even when weather conditions change dramatically.

The ECU is powerful, but extremely difficult to master. Without mastery, the ECU must be simplified, removing what makes it so desirable. The result is an incomplete product that often requires end user adjustment to maximize output in limited scenarios. On the contrary, APR’s Engineers spent the better part of a decade mastering the ECU to unlock its full potential. With complete access to the thousands of maps, tables and variables within, as well as a high-level understanding of how it works, APR’s Engineers were able to take advantage of everything the ECU has to offer. Power is maximized in nearly all scenarios, eliminating the need for end user adjustments. High performance operational modes are enabled and calibrated to deliver smooth daily driving, with a snappy and responsive throttle during moments of spirited driving. Mastery of the boost control system makes for an impressively predictable driving experience as the turbo spools quickly, delivering instant power, while torque-by-gear helps with traction control and protects the engine from being lugged out in tall gears. Lastly advanced high-output protection routines are enabled, allowing the ECU to make constant adjustments to airflow and fuel to cool and protect the engine, all without the driver knowing otherwise.

APR’s Enhanced Modular Chipping System, (EMCS), brings selectable programs and features to the factory ECU, without the need to purchase external hardware switching devices. EMCS has the ability to completely rewrite the entire operating map data within the ECU, giving each program mode a completely different set of calibration changes. On this platform, this is contrary to the industry norm of capping limits, using multipliers, only swapping portions of a base calibration, or relying on knock activity to lower output. APR’s EMCS features and programs modes are activated via the factory OEM cruise control buttons, and optionally through APR Mobile. The vehicle’s cruise control will function normally while driving.

To learn how to activate the programs and features, choose the vehicle's cruise control type from APR EMCS Owner's Manual.

Program Switching:
Program switching allows the user to cycle through up to four different engine calibrations and operating modes all without the need for external hardware.

Stock Mode: By selecting stock mode, the ECU calibration is reset to the factory calibration.

APR Performance Modes:
APR's octane-specific calibrations are available for various premium and race fuels around the world. Each performance mode is a completely new calibration, altered specifically for the characteristics of the fuel quality selected.

Anti-Theft:
When activated, Anti-Theft prevents normal operation of the engine even if the factory key is used. The vehicle will be completely immobilized until a user specified 2 to 4-digit security code is entered.

APR Mobile is a simple yet powerful tool designed to enhance the APR tuning experience.

APR Mobile installs on smart phones, tablets and other devices and provides a wireless connection to the vehicle’s engine control unit or ECU. Once connected, the device can be used to access APR’s EMCS program switching features, read and clear fault codes and data log the ECU at high data rates not found on other commercially available tools. The app can also be used to access APR’s latest news articles, locate dealers in APR’s network and review previously saved data logging sessions. 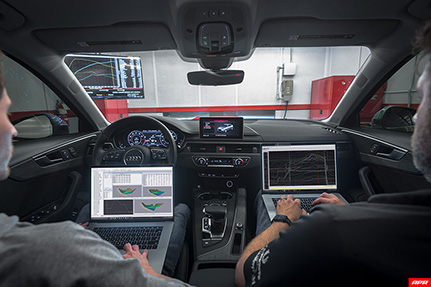 APR’s Electrical Engineers have the ability to alter the code structure of the ECU. Through code levels changes, APR's Engineers are able to add features to the ECU. Other changes allow higher torque limits than those achievable through only modifying calibration data or using piggyback devices as is the case for many tuners. This allows APR's engineers to often not require transmission software to meet or exceed advertised gains. On the highly modified end, this often allows APR to make turbo upgrades operate without the need for external manual controllers.